“Fruitful talks with UNSG SRs on Afghanistan, Mr. Arnault, and on Yemen, Mr. Griffiths,” he wrote, also posting photos of the meetings. 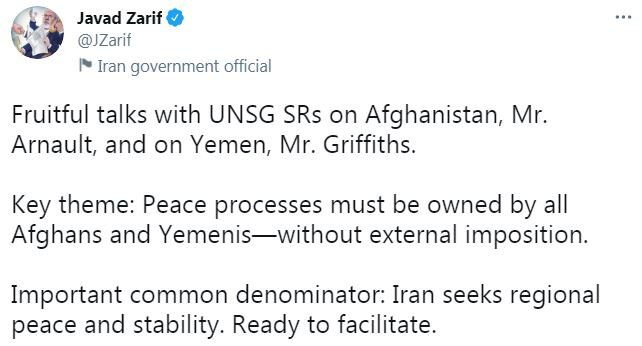 In the meeting with Griffiths, Zarif explained the views of the Islamic Republic of Iran on ending the crisis in Yemen, stressing the need to lift the siege of the Yemeni people and facilitate the provision of humanitarian aid to them.

Stating that war is not the solution to the Yemeni crisis, he added, "We can end the current miserable situation in Yemen, which has exposed the Yemeni people to a humanitarian catastrophe only through political dialogue and peaceful means."

And during talks with Jean Arnault on the same day, the Iranian minister emphasized Iran's support for intra-Afghan talks and the protection of the achievements of the Afghan people over the past years, especially in the field of fundamental rights of the Afghan people.
http://www.taghribnews.com/vdcam0nme49nw61.tgk4.html
Share It :
Related News

"Holy Qur'an stresses respect for sanctity of all religions", cleric

Lack of US vital interests in Afghanistan empowered Taliban

Taliban, a project beyond Afghanistan