And for those fans unable to make it to one of Doha's many mosques to attend prayers ahead of Qatar's match versus Senegal, authorities set up an outdoor prayer just steps away from the Al Thumama Stadium.

While having a crowd of hundreds sitting on a carpet outdoors listening to a preacher give a sermon is an unusual site for football events in the western world, Muslim fans say Qatar's World Cup has accommodated them like no other tournament, with prayer rooms inside each stadium, concessions selling halal food and no beer-swilling supporters to contend with in the stands following a stadium alcohol ban. 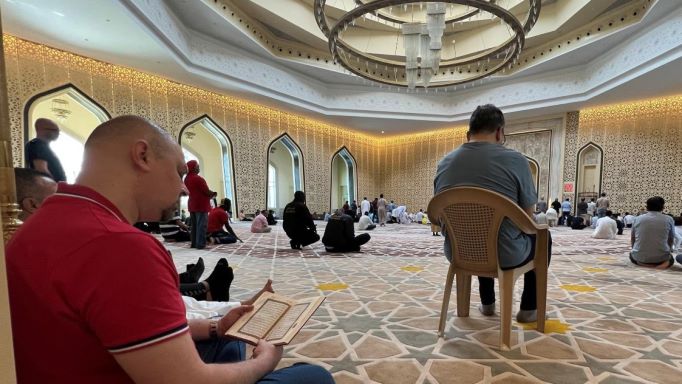 Yousef al-Idbari, a visiting fan from Morocco said "I came to an Islamic country to attend Friday prayer... This is what makes me happy in this competition."

During
Outside Al thumama stadium in Qatar today for the congregational Friday prayer. Islam is indeed beautiful. I have every reason to be proud because I am a Muslim. @kiramjoho @khalidjoho @Asmali77 what do you make of that opulent kind of environment? — Nasirmagan (@nasirmagan) November 25, 2022
a night-time official fan festival event in the city, the speaker announced a pause in festivities to the entire crowd to allow for the Muslim congregants to take a prayer break.

Qatar has also made an effort to feature Islam and Muslim culture throughout the first week of the tournament with sayings and teachings of the Prophet Muhammad posted around Doha and translated into multiple languages including English.

Sunday's opening ceremony began with a female singer donning a traditional burqa, a face covering banned in several European countries, who also recited a verse from the Quran about God creating humanity into "nations and tribes" so they can get to know one another.

"For 450 million Arabs, this is something they thought they would never see in their lifetimes," Ali al-Ansari, Qatar's media attaché in the United States, said in a written statement to the New York Times.

Ridwaan Goolam Hoosen, an avid South African soccer fan, told Reuters he frequently has to leave football grounds in order to find a prayer space, including at the 2010 World Cup in South Africa.

"You go out and you miss a team goal or you miss someone getting sent off," he said. "It feels as if this World Cup is for me, it works for me, it fits for me... This is the first of its kind like this."
https://www.taghribnews.com/vdceve8npjh8fni.1kbj.html
Share It :
Qatar World Cup 2022 Friday prayer
Related News

"Jail term for denial of Holocaust, freedom of speech for desecrators of holy Qur'an?"